Here’s an example of the original version of a script, and then how it sounded when it was produced (you can listen to it at the bottom).

HelloOOOOOOO. And welcome to Dr. Straaaaaaaangeglove’s Strange tales from the world of straaaaaaange.

Today I have a strange tale to tell. I call it:

Now, I’ve always liked the Zoo. Last time I was there I visited the monkey cage and they very nearly didn’t let me out. Now the gorillas didn’t like me- they were always grilling toast and the marmosets were always putting marmalade on the griller’s toast. Only the marmalade wasn’t set so the marmosets were set for Marmite instead. I’d have stayed in the gibbon’s cage- gibbon half a chance! But today they weren’t dancing in a funky way and I wondered why. I asked the elephant but he’d forgotten, and the rhino kept charging me. For information.

I decided to get to the bottom of it- so, finally after questioning all the animals and Drawing a blank, I decided to ask the humans. Now, the zookeeper told me, after eating his pickled dormouse sandwich, that the answer lay in its new exhibit. I thought “Zoo does he think he is? Lying down when there’s plenty of work to be done? Those wood-shavings won’t just group themselves into a big pile by themselves you know!” And so they didn’t. The human keeper soon put me straight- he got out his ruler and started folding me into a paper bird. He then put me in the Origami cage where I found the answer.

Across the way I saw a sign. I couldn’t make out what it said as I was peering through the bars and there were black stripes vertically striking through it. Then the zebra moved out of the way and I got to read the sign properly. It read “These animals are kangaroos”. “Hmm. I thought to monself. Surely to goodness the giantiferous hippety-hops from the upside-down world planet of Oz weren’t top blame. Nah. They were all to busy jumping up and down and doing Rolf Harris impressions.

Then I saw ANOTHER Sign. It read. “These animals are dangeroos” “Dangeroos!” I thought to myself. “The kangeroos deadly impersonators! Only they’re NOT kangeroos they’re dangeroos! Oh no!” And that taught me a lot. If there’s one thing worse than dangeroos it was being locked up in a cage with origami swans, ducks and chickens with the dangeroos cage just feet away.

And what massive feet they were! The dangeroos hopped around the cage until I was scared. And, when the zookeeper swept up the mess I was freed.

It was then that I noticed my free-er was a hippopotamus. A tall hippopotamus who’s name was Lee.

“My name’s Lee. And I’m an UpandHappy-potamus. Come and join me on my show. It’s on Saturday mornings from 10 till 12”.

And that was the story of how I came to be.

Hopefully Dr. Straaaaaaangeglove will be back with some more of his straaaaaaaange tales. I want to hear more about that toaster story, it sounds really spooky…

And here’s what it sounded like when we made it. 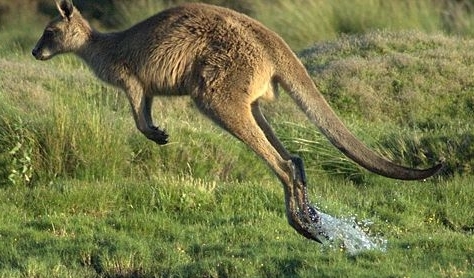