After learning the news that he had created himself in a totally bonkers paradox, Dr Strangeglove and his friends Lee B, Wally Pop and Miss Fitt shomehow wind up in a nightmarish dreamscape. How did they get there? Who is responsible? And how will they escape? And does Wally Have enough tuna sandwiches to last the jurney home?

About the author: P.A. Whitmore has written for radio (101.8 WCR FM) comic strip (Krash magazine) and stage (Sitcom Saturday) his other series include “MR CUSTA” a surreal sci-fi comedy set on a parallel Earth. And “PRAZE & BEEBLE” a horror comedy. 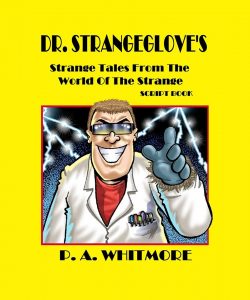 Have you ever read… a script book?

Welcome to the weird and wonderful world of Dr Strangeglove, the impossible mad scientist who will do ANYTHING to be famous.

Dr S, together with his best pal Mr Lee B: DJ extraordinary, and new guy Dan, rubn riot through 14 of the latest weirdly amusing radio excapades.

Together they encounter such straaange phenomina such as dream rats, peeing cats, swarms of wasps, and scary egg men. They also discover a new planet, build an Ark and stage their latest variety show.

About the author: P.A.Whitmore has written for…